To celebrate our tenth anniversary we are re-editing one of our very first publications, the complete edition of the Treviso Cathedral Codice 36 (I-TVd 36).

Pater noster/Ave Maria (SAATB) could be an intended homage paid to Josquin. The tradition of combining the two texts and plainchants as parts of a motet had a great relevance on Northern Italy: Adrian Willaert.  Gioseffo Zarlino or Jacquet de Mantua followed this tradition after Maistre Jhan. 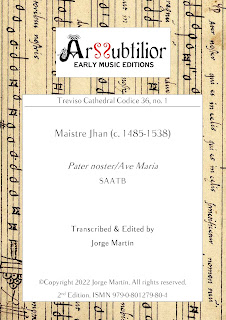 (This is the foreword for the complete edition of the Treviso Cathedral Codice 36 we published back in 2012:)

The Treviso Cathedral Codice 36 (henceforth, I-TVd 36) is the oldest polyphonic manuscript extant in this Cathedral (c. 1530). It is one of the most valuable musical manuscripts of the 16th century in Northern Italy and also an essential source for the motets (most of them unica) of Maistre Jhan (c. 1485-1538).

Although the I-TVd 36 is now kept in the Treviso Cathedral Archive, this was not its original place, as it was probably copied and kept in Ferrara until the end of the 16th century. This certainty is due to two reasons: 1) the majority of works by Maistre Jhan (more than a half of I-TVd 36), who served the Dukedom of Ferrara until his death, and 2) the presence of the circumstance motet Hebe potens cithara by Magister Symon [Simon of Ferrara], dedicated to the death of one of Ercole I d’Este’s children, Sigismondo, who died in 1524.

The I-TVd 36 is formed by five partbooks, Cantus, Altus, Quinta pars, Tenor and Bassus. The real voice in each partbook varies from one work to another, specially the Quinta pars, which is usually a Tenor or an Altus. The manuscript was mainly copied around 1530 (perhaps around 1524, year of Sigismondo’s death) and has two later additions, the short motet Sancta Maria at the end of the manuscript (the only unnumbered work in I-TVd 36) and an anonymous Mass. A more detailed codicological description of I-TVd 36 can be found at DIAMM.

The manuscript contains 30 works, 29 motets and the anonymous Mass, all for five voices. The most representative composer in I-TVd 36 is Maistre Jhan (18 motets), followed by Jacquet de Mantua and Adrian Willaert (3 motets each), Jean Lhéritier (2), Magister Symon and Costanzo Festa (1 motet each) plus 3 anonymous works, two motets and a Mass.

Even though the I-TVd 36 contains manuscript versions of works found in other sources (8 motets by Jacquet de Mantua, Jean Lhéritier and Adrian Willaert), several motets are unica, mainly those by Maistre Jhan. George Nugent and James Haar in the New Grove (2001) list nine unica motets in this source. Furthermore, only one edition of Maistre Jhan’s motets in I-TVd 36, Pater noster/Ave Maria, appears listed on the New Grove article, and it was published on 1897.

As a result, this premiere world edition of I-TVd 36 sheds light on the music in the Dukedom of Ferrara on c. 1530, and especially on Maistre Jhan, a long neglected composer linked with the Dukedom for more than 20 years. His motets show an experienced skill with canons, cantus firmus ostinato, harsh armonies and even chromatism.