The first Mass in the Liber primus missarum (Madrid, 1602), based on the homonym six-voice motet by Francisco Guerrero. This is a six-voice motet, unica in E-SAc LP 1, and a complete different work from the homonym eight-voice motet in the Liber motectorum printed in 1610 (which can be also purchased or downloaded here).

We are proud to announce the release of our edition of the motets by the unknown Spanish Renaissance composer José Gay (†1587). According to Luis Antonio González Marín in his article in the Diccionario de la Música Española e Hispanoamericana, José Gay was born in Valencia in an unknown date. He was the chapel master in Gandía, and in his last months he moved to Zaragoza where he got the post of chapel master in the Cathedral.

The motets of José Gay show a style we can see in composers that never worked outside Spain such as Alonso Lobo, Sebastián de Vivanco, Alonso de Tejeda or Ambrosio Cotes: rhythm variety, expressive harmonies and a certain degree of counterpoint complexity.

Remember, you can buy or download our scores for the price you want!

This new edition of this Missa De Septem Doloribus (one of the most intriguing and important works by Pierre De La Rue) has been prepared comparing three sources: BrusBr ms 215-16, BrusBr ms 15075 (Royal Library of Brussels) and D-Ju ms 4 (University of Jena). 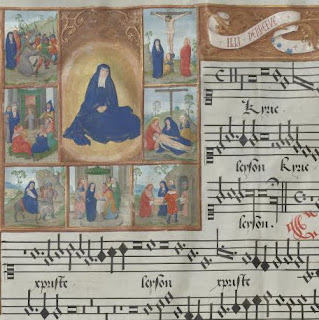 Email ThisBlogThis!Share to TwitterShare to FacebookShare to Pinterest
Labels: Buus

Email ThisBlogThis!Share to TwitterShare to FacebookShare to Pinterest
Labels: Vivanco